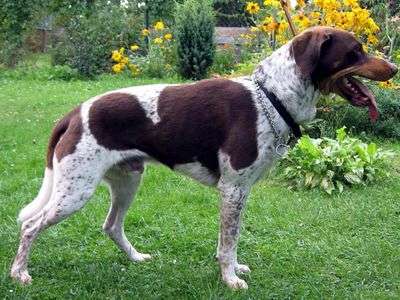 The Ceský Strakatý Pes, affectionately called a ‘strakaci’ in its native Czech Republic, is also known as the Czech Spotted Dog or Bohemian Spotted Dog. Its background is unusual as it originates from a laboratory where it was bred specifically for medical and genetic research. Today it has become popular as a pet, due its intelligence, sociable nature and attractive spotted coat, and its numbers are gradually increasing.

Few dogs’ ancestry can be traced as accurately as the Czech Spotted Dog. It was created in the 1950s in the laboratory of Frantisek Horak. This Czech scientist used the dogs for medical experiments such as kidney transplants and to research epilepsy and genetic illnesses. The original Horak Laboratory Dogs were the result of breeding a female Riga with a male Misi in 1954. Their offspring underwent further selective breeding which resulted in a new breed with a brown coat and spotted markings. Horak’s laboratory was the only place where the dog was seen, apart from an appearance at a 1961 dog show, until a litter was raised by a private breeder in 1981. Czech Spotted Dogs nearly became extinct, with only six remaining in the 1990s, but careful breeding increased their numbers. Today it has become a popular breed of dog in the Czech Republic, although it is not internationally recognised.

The Ceský Strakatý Pes is a medium-sized, square built dog with balanced proportions. Its average height is around 18”. It has a beagle-like head with a flat skull. The muzzle is as long as the skull with lips fitting close to the jaw, which has a regular scissor bite. The ears are V-shaped and tilted forward from a bend just above the crown, the nose is straight-bridged and the eyes are almond-shaped and brown. The neck is strong and slanted onto a straight back and slightly sloping rear. The chest should be spacious but not barrel-shaped and the belly is taut and tucked up.
It has a flat, thick double coat that can be short or long and is tri-coloured in a combination of either brown, tan and white or black, tan and white. There are distinctive dark spots on the white patches. The tail is straight and tapering with hair that can be long and flagged or short-haired, corresponding to the rest of the coat.

The rather tragic early history of the Ceský Strakatý Pes has had the fortunate side effect of creating one of the world’s most easy-going, low maintenance and sociable dogs. The breed’s creators deliberately bred in character traits that would make them easy to deal with in the laboratory and their descendants are still extremely eager-to-please and co-operative. They are very good with children and other animals and make excellent family pets.
They are as happy in a small apartment as they are in a house or garden but they do enjoy long walks. Czech Spotted Dogs are very easy to train and are lively and agile without being boisterous. They form a strong bond with their owners and are very protective, making good guard dogs that will bark without becoming aggressive. These dogs are not fussy eaters and have a healthy appetite.
Due to the research programs into teeth loss and epilepsy that the dogs were used for by Horak, some Czech Spotted Dogs are born with missing molars and premolars and can be prone to epileptic fits. Efforts are being made by breeders to eliminate these faults and dogs with these tendencies should not be used for breeding.