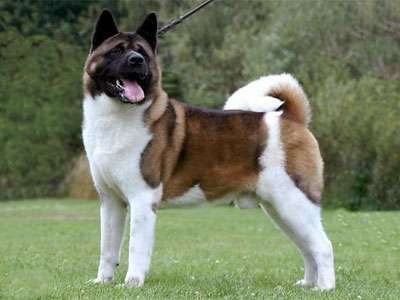 There are two distinct breeds of Akita; the original Japanese breed and the newer American breed. Unlike the Japanese breed, the American Akita can have a black mask, while the weight of males and females tends to be extremely similar.

As the name suggests, the original Akita hails from the Akita region of Japan and this breed is the national dog of Japan. The breed has a large number of different uses including in police and military work, a fighting dog, a guard dog, and a hunting dog. The Akita was first brought to the USA by Helen Keller in 1937 and shortly afterwards the American Akita breed was established. This breed is slightly larger than its Japanese counterpart and is considered to be a separate breed in most of the world.

The American Akita features a large body that is unwrinkled when relaxed and the broad skull is flat between the ears, while the head is shaped like a blunt triangle when it is seen from above. The breed features broad and powerful jaws with minimal dewlap and a broad and full muzzle, while the stop is well defined. The nose is broad and black while the ears are particularly characteristic of the American Akita and are triangular, strongly erect and rather small in relation to the size of the head. The tail is large and full, with straight and full hair. The American Akita can come in a wide range of different colours and variations including white, brindle and pinto, while coat colours are rich, clear and brilliant. The markings on the coat are well balanced, while the back is strong, firm and level and the rear legs always move in line with the front legs.

The American Akita has a docile temperament and is known for being intelligent and fearless. While this breed is typically a pack leader, it is extremely affectionate when part of a human family. However, it is essential to establish dominance over the American Akita at an early stage and follow strict training to prevent the breed from becoming aggressive when confronted with other dogs. All of the members of a family including children will need to assert authority over the American Akita so that it quickly learns its place in the pack and does not try to take control. Although the breed likes to vocalise, it does not bark excessively.

The American Akita is prone to health problems such as hypothyroid and autoimmune thyroiditis, hip dysplasia immune diseases such as Pemphigus and VKH, knee problems and certain types of skin problems.

The America Akita is only moderately active when indoors, which means that it can live in an apartment, while outside it requires a large yard.

The America Akita only requires moderate exercise and one fairly long walk a day should be sufficient. The fur of the American Akita requires very regular grooming with a firm bristled brush, although bathing should be kept to a minimum to prevent removing the breed’s natural waterproofing on its coat. The breed sheds heavily twice a year and can be kept outside during this time.

Thor at Blackbear Mountains
Kariudogoya's Ebony as the Night