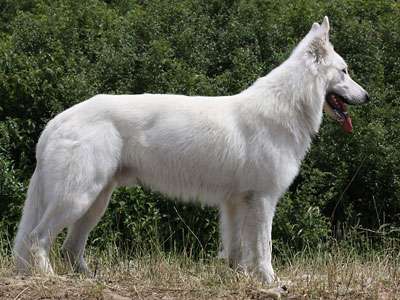 The gentle-natured White Swiss Shepherd makes an ideal family pet, but can also be trained as a working dog. Although directly descended from the German Shepherd, it has evolved as a distinct breed with its own characteristics. Lively, spirited and loyal, this shepherd dog can be trained to compete in herding events, as its name suggests, but it also has many other talents.

Typically, White Swiss Shepherds are mellower and calmer in personality than German Shepherds. They are often wary of strangers, but are not aggressive or frightened of them. These dogs are also highly intelligent and sensitive, and naturally keen to please their trainers. This means obedience training can normally be accomplished without the need to use harsh methods.

The breed has a life expectancy of around 12 to 15 years. Devoted to their owners, these loyal shepherd dogs are ideally suited as pets for families with children. They are also in demand as watchdogs and for agility and tracking work. Some are trained to work with police or search and rescue.

The White Swiss Shepherd is a young breed which only won official recognition in Switzerland in 1991. But its roots go back much further, as it is descended from German Shepherd dogs with white colouring.

Early in the 20th century, white dogs were disqualified from competition under GSD breed standards. But some trainers, especially in the USA and Canada, continued to breed white dogs over a number of generations. A white American dog called Lobo, born in 1966, was registered in Switzerland and was the progenitor of most of the breed in Europe.

The breed, also known as the Berger Blanc Suisse, was awarded full recognition by the Fédération Cynologique Internationale (FCI) in 2011. It is classified in Group 1, Sheepdogs and Cattle Dogs, under the FCI standard 347, without working trial.

This medium-sized dog has a powerful and muscular build. A male dog from the breed stands around 60 to 66cm tall, with a weight of 30 to 40kg, while a bitch has a shoulder height of 55 to 60cm and weighs 25 to 35 kg. There are two different varieties, with long and short hair.

The White Swiss Shepherd has a deep chest and a well-chiselled head which must be in good proportion to the rest of the body. While most of the coat must be white, there may be areas of slight fawn shading on the back, the tips of the ears and the tail's upper area.

Exercise is vital for this breed, and, because of their high intelligence, the dogs also need to be involved in interesting activities. These loyal and loving animals are very good with children if they are properly socialised and accustomed to them from a young age. Gentle training methods such as clicker training are likely to work well and get the most out of a White Swiss Shepherd.

These dogs are heavy hair shedders, so daily grooming is essential, but they do not need specialist grooming. High quality feed and regular vaccination, worming and veterinary care are all important to keep these active, lively dogs in good shape.