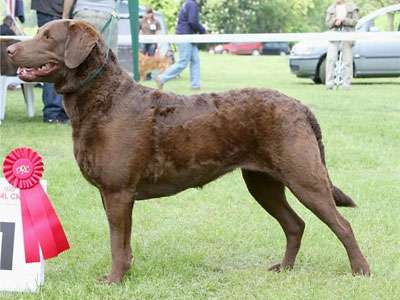 As the name hints, the Chesapeake Bay Retriever is breed that is directly related to the larger retriever group along with other sporting dogs. Like other retrievers, this dog is considered to have an excellent temperament and therefore, it will make a wonderful family pet. However, as it was also bred for hunting waterfowl, the Chesapeake Bay Retriever is also quite fond of water and requires a fair amount of exercise. This is a highly intelligent dog with a proclivity towards gregarious behaviour and while quite friendly, it can also be protective over other family members. Staying true to its breed, Chesapeake Bay Retrievers are naturally curious and inquisitive.

This dog shares several of the same characteristics as other retrievers. The most notable difference is that as opposed to the smooth hair of the Labrador Retriever, this breed is known for its wavy coat and a more stocky build. Other than these slight discrepancies, the Chesapeake Bay variety is seen to appear much like its close relatives.

This retriever was bred sometime during the middle of the nineteenth century and the first historical account can be traced as far back as 1807. As it was first seen along the Chesapeake River and Bay, its name is primarily derived from this location. Like other retrievers, this variety was primary introduced to hunt waterfowl for the market tradespeople who would then sell this food to the general public.

As previously mentioned, this breed boasts many of the same characteristics as the entire retriever family. Some additional differences include a hindquarters that are slightly higher than the shoulders (a feature not seen in other retrievers), strikingly amber eyes, a broad head and a powerful chest. The pronounced muscularity of the chest is thought to aid in ice penetration when diving into water during the winter months.

The coat of this animal is considered to be one of the most important breeding characteristics, as it is noticeably oily and will protect the dog against hypothermia when wet. Although the colour is not overly emphasised, it was traditionally preferred that the shade should match the working surroundings. While not taken as seriously in modern times, many show dogs will exhibit browns, chestnuts or tans. White (around the chest) is not as desirable but is permitted.

The Chesapeake Bay Retriever is an extremely intelligent breed and this quality is shared across the entire spectrum of retrievers. They are known to be extremely vibrant and happy; some will even display their teeth in a mock "grin" when showing joy. They can be quite assertive but are nonetheless excellent pets to have around the home.

This high level of intelligence can allow training to be either productive or challenging. A willful dog will require daily sessions and while in the past physical discipline was considered mandatory, it is thought that consistent reinforcement precludes such an approach. As this retriever was primarily bred for hunting small game, most training should involve physical activities as a reward.

Like other retrievers, the Chesapeake Bay variety can suffer from certain congenital conditions with age such as cataracts, localised alopecia (hair loss) and hip dysplasia. Their eyesight may also become poor into late adulthood. The median age for this animal is 9.4 years while some have lived as long as thirteen years. Generally, this animal is quite healthy and robust.

These are some of the primary characteristics of the Chesapeake Bay Retriever. Boasting a friendly and active disposition, this animal is an ideal companion and quite affectionate.