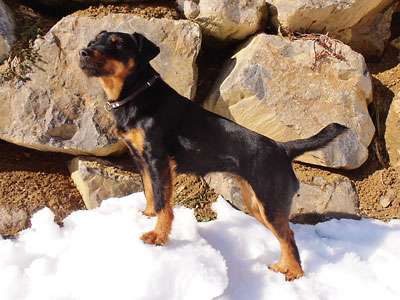 The German Hunting Terrier, or German Jagdterrier, is a popular breed due to its hunting skills and loyalty to its master. Its name derives from the Latin word for "earth", namely "terra", as the ancestors of terriers hunted wild animals living underground. Known to Germans as "Jagdterrier", this breed of dog is very new, developed in Bavaria at the turn of the 20th century. It was used mainly for hunting foxes, badgers, weasels and wild boar.

This descendant of the more established breeds of Tan Wire and Fox Terrier inspired the formation of the first Jagdterrier Club in 1926. The '50s heralded a new era in the history of Jagdterriers, with dogs being taken to North America for use in squirrel hunting. The United Kennel Club in England recognised the breed in 1993, but the Jagdterrier is rarely bred or used for hunting outside Europe.

German Hunting Terriers are tenacious and hardy dogs. Their liveliness and their innate hunting abilities can make them challenging. Keeping up with a dog as energetic as this can be time-consuming, but very rewarding. With copious amounts of exercise at predetermined times of the day, the German Hunting Terrier can be left to his own devices, most of the time. This terrier is extremely dedicated to what it perceives as its purpose, and it needs to be given hunting-related tasks regularly. Without this type of routine mental and physical stimulation, it will not be calm inside the home.

Good, firm obedience training is necessary early on to ensure appropriate behaviour in your household. Once outside, its behaviour changes dramatically as it looks for things to track and hunt. It loves to swim and run. It will retrieve anything it deems large enough to carry, and it will use its powerful nose to track down the scent of hidden objects.

Although a wonderful family pet, with an instinctive love for the master and the children of the family, and a very protective nature, it is naturally aggressive toward other humans and animals. Small animals, in particular, are extremely vulnerable when left in the company of a Jagdterrier. However, if raised in the company of other pets from a very early age, it will become affectionate toward them. Its alert and territorial nature will become apparent even as a puppy, when it will adopt the duties of a watchdog. It needs professional training or at least a firm hand to be able to stay in the house without inadvertently becoming destructive. It develops a strong attachment toward its perceived master, and it needs to be trained to interact socially with other family members without rejecting their company.

This terrier has a short, smooth or wiry coat, in various colours: grey, black, brown or variations with white, brown, or reddish markings. It sheds virtually no hair and only requires occasional brushing and bathing. A male will grow to 16 inches (40cm) in height and up to 22 pounds (10kg) in weight, with females reaching up to 17 pounds (7.7kg).

German Hunting Terriers are usually fit and healthy, and prone only to minor lung conditions. Curious but light on its feet, adventurous but resourceful and fit, this terrier will just as easily get out of harm's way as in. Without notable genetic conditions or breed-specific health concerns, a Jagdterrier individual will live up to 15 years. Their boundless energy levels are incompatible with those of elderly owners, but those interested in training their pet and eager to go hunting with their dog will find that the small, versatile and maintenance-free German Hunting Terrier ticks all the right boxes.