Livestream patrocinadores Shop
hola
Register to use all functions.
Detail 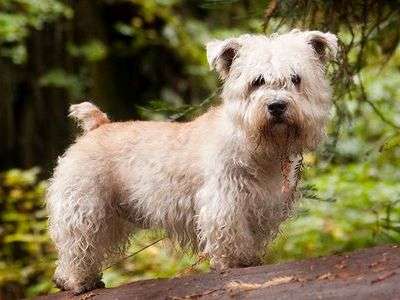 The Irish Glen of Imaal Terrier is believed to be one of the oldest European dog breeds. Its history goes back hundreds of years as writings from the medieval period have been found that mention its existence. As its name suggests, the Irish Glen of Imaal Terrier originates from the valley of Imaal in the county Wicklow, which is situated on the eastern coast of Irland. There it was originally bred by local farmers for different puposes. As a brave and highly intelligent little dog, the Glen of Imaal Terrier served as a guardian to protect the houses, farms and sheep herds and as a skillful hunter of rats and mice, badgers and foxes. Cynologists believe that it was developed as a cross between Coated Wheaten Terriers, Scotch Terriers, English Bulldogs and Bullterriers. Because of these genetic influences the Glen of Imaal Terrier was also used in dog fights for centuries. As these were banned across Britain in the 19th century, today nothing in its personality reminds of its past as an aggressive fighting dog.
Due to its extraordinary and very versatile talents the Irish Glen of Imaal Terrier held on to its popularity in its homeland throughout the centuries. It only became known outside of Irland in the late 19th century, when a few of these dogs were shown at an exhibition and caught the attention of breeders and dog enthusiasts from abroad. It took another sixty years before the Irish Glen of Imaal Terrier was first registered as a UK breed in the 1930s.

The Irish Glen of Imaal Terrier is of a small and robust build. Measuring about 36 centimetres in shoulder height it can weigh up to 16 kilos. Its most distinctive features are the small half-prick or rose ears and its out-turned front feet. Its long and rough fur is of medium length. It consists of a topcoat in a somewhat harsh texture and a slightly shorter and softer undercoat. The possible colour variations include different tones of red, cream or wheaten. A blue colour, which can apeear as slate or silver is also common. If the coat is brindle, it often shows a pattern of darker patches or streaks, mainly along the backline which normally fade with age.

Unlike most other Terrier breeds, the Irish Glen of Imaal is not a loud barker, but a docile dog with a very calm, almost stoic nature. It is devoted to its owners and loves to spend its time in close company with humans. It is highly intelligent and can therefore sometimes be stubborn and show an independent mind. As a family dog it is loyal, gentle, very playful and loving with children of all ages. It is friendly to strangers, but also a very talented guard dog. If it senses potential danger or is faced with an unwanted intruder, it will do everything to protect its territory and family members. Although quite small in size, two of its most impressive characteristics are its outstanding courage and its self-confidence.

The Irish Glen of Imaal Terrier is very easy to keep and therefore suitable for experienced dog owners and beginners alike. It is happy living in a city apartement provided it gets daily exercise. The Glen of Imaal terrier is very popular amongst elderly people, because it is calm, quiet, very sociable and easy to train. Because of its high intelligence its talents should be nurtured. Regular activities like agility or games keep a Glen of Imaal Terrier entertained and well-balanced. If bored it can develop unwanted behavioral issues. Due to its past as a versatile hunter of rodents, foxes and badgers it has a very strong urge for digging. This needs to be considered when being kept in a garden. As a hunter it can be hard to hold it back once it has detected a wild animal. This means it should always be kept on a leash when out and about in the open countryside.