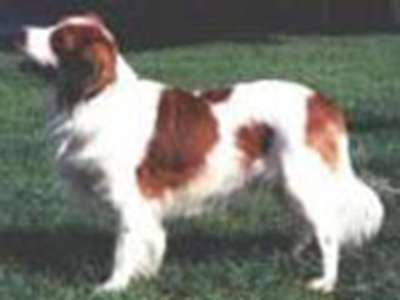 The Nederlandse Kooikerhondje is a little-known canine breed that originated in the Netherlands where they were mainly employed in the pursuit of duck hunting. It is a handsome example of a spaniel-type breed of sporting dog, which would have made it popular among the older aristocracy. In fact, this dog became extremely popular with at least one royal after reportedly saving William of Orange from being attacked by Spanish intruders in 1572, while he slept. Persistent barking and jumping on his master’s face is what did it, and these guarding qualities are still very much in evidence today.

Standing approximately 15 to 17 inches tall at the shoulder (14 to 16 inches for a female), the Nederlandse Kooikerhondje has a long, decorative coat that has elaborate fringing draping from the legs and chest and a tail that resembles a feather duster. The coat is generally white in colour with large patches of red. The skull and muzzle of the Nederlandse Kooikerhondje are almost equal in length, while the body’s proportions are practically square. Feathered ears are generally black-tipped with what are commonly known as earrings. Soulful, almond-shaped eyes are alert and filled with a pleading expression, which seems to beg for a cuddle or scratch.

The Nederlandse Kooikerhondje’s alertness and enthusiasm is what made it perfect for the job of shepherding ducks into a hunter’s trap. Perseverance and resolve are what kept it employed as top dog in the industry and as a very able assistant in clearing out vermin. The fact that this breed accomplished both missions with distinction provides some insight into its willingness to accept training in the development of further skills.

The Nederlandse Kooikerhondje is undoubtedly highly intelligent and a great strategist. His role in duck hunting involves being able to entice them into the decoy pipe where they will be trapped. The dog loves pleasing its owner and brings 100 per cent of its large store of enthusiasm to work every day. Good natured and friendly, it can, however, be a little wary of strangers, but will quickly decide if they are friend or foe. Once the decision has been made, the dog will not waver from it and friendship will be rewarded with everlasting trust and affection.

This breed enjoys confident leadership, and an owner who establishes this early will have a good natured and well behaved companion that will happily adapt to apartment living, as long as sufficient exercise is made available daily. This adaptability extends to changing its behaviour from quiet to loud, whichever a situation demands. It is a further reason why this dog can be apartment trained, although a fenced garden would still be preferable.

The Kooikerhondje has a medium level of energy combined with a large sized appetite, which can result in a tendency to heaviness if not properly addressed by an owner. Thanks to stringent breeding rules, the life-threatening conditions that once afflicted the breed have been minimised, making this a relatively healthy dog with a life expectancy of 12 to 14 years.

Also known as the Dutch Decoy Dog, this breed is highly trainable and simply needs strong leadership to develop into an excellent follower. Early socialisation is a good idea with any breed of dog, and this one is no different if it is intended to be around children or other animals. Although loyalty, affection and protectiveness are part of the dog’s make-up, it does not easily include young children. Puppy kindergarten, strong leadership and regular socialising can make a significant difference.