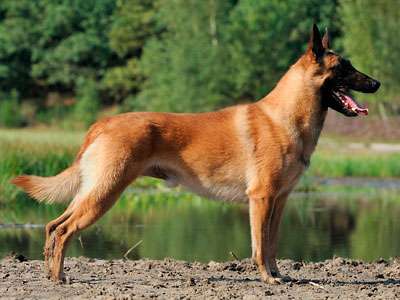 The Belgian Shepherd is also commonly known as the Belgian Sheepdog and can be recognised by its well-muscled body, which is covered by a tight skin. There are four different types of Belgian Shepherd, with the Groenendael being the most common.

Since 1959, four distinct breeds of Belgian Shepherds have been recognised. All four breeds are highly intelligent and versatile and excel at a number of different tasks including police work such as bomb and narcotics detection, protection, search and rescue, sled and cart pulling, herding and as a guide for disabled and blind people. The first type of Belgian Shepherd to be established was the Belgian Malinois, closely followed by the Groenendael, the Laekenois and the Tervuren.

This breed of dog features a squarely proportioned body and the overall size of its head should be in good proportion with its body with the top of the skull rounded. The breed features a moderately pointed muzzle, while the lips are tight. The breed features an even bite, while the eyes are brown, medium in size and almond-shaped. The ears are triangle in shape when erect, while the legs are parallel, strong and straight. The dewclaws of this breed are usually removed and the feet bear a cat-like shape. The breed boasts a moderately long, weather-resistant coat that features featuring around the tail, legs and underneath the body, while the colour of the coat is either solid black or with white patches on the toes, chin or chest.

The Belgian Shepherd is typically bright and obedient and displays strong territorial and protective instincts. The breed requires extensive socialisation from an early age in order to prevent it from becoming sensitive or shy. The breed responds well to a firm master and a ridged and clear set of rules, although it will become uncooperative if treated harshly.

This breed is extremely hardy and healthy and has no major health issues. However, a few minor health concerns have been seen with the Belgian Shepherd such as epilepsy, eye problems, skin allergies, excessive aggressiveness, excessive shyness and occasionally hip and elbow dysplasia and elbow dysplasia. This breed should not be overfed, as it has the tendency to become lazy and obese.

The Belgian Shepherd can sleep outside, although its sociable nature means that it prefers to be around other dogs or humans. The breed needs a moderate amount of room to run around in and can stay in an apartment or a house if it receives a good amount of exercise during the day.

This breed is primarily a working dog and therefore requires a large amount of exercise including a long walk at least once a day. Due to the long length of the breed’s fur it requires regular combing and brushing. If left unbrushed, the fur can easily become matted and will then need to be cut short. The breed tends to shed heavy twice a year, although it also sheds moderately throughout the year.

In addition to being a good family dog, the Belgian Shepherd makes a good guard dog. The breed can be very good with children if introduced early, although their elevated mental capacity means that they can become bored easily. If the breed is left unattended for too long and becomes bored, they may become destructive and cause damage to property.